Our sweet Finley came home from China in June 2016 at the age of 24 months. She was the most verbal of our Chinese toddlers and EXTREMELY independent! She had the most adorable round face, shiny black hair (cut into a bob), and a diagnosis of Ectrodactyly (special hands and feet). This means the only finger on her right hand is her pinky, she has only a thumb and pinky finger on her left hand, and she has the sweetest feet shaped like lobster claws (2 large toes on each foot).

We had no idea what her future would hold. Would she be able to hold a pen? Would she ever feed herself? How would she handle the stares from others? The only thing we knew for sure is that we were determined to follow her lead and let her teach us what she could and couldn’t do. And, we would soon find out, our tiny girl could do ANYTHING she put her mind to!

Ectrodactyly is a fancy name for split hand/split foot malformation. The hands and feet of people with Ectrodactyly are often described as “claw-like” and may include only the thumb and one finger with similar abnormalities of the feet. In medical terms, it is the congenital absence of all or part of one or more fingers or toes. A large number of gene defects can cause Ectrodactyly, but a hereditary gene mutation is said to usually be the cause. This means there is a high chance of a parent with Ectrodactyly to pass on the trait to his/her child. (Which makes me wonder often if one of Finley’s birth parents may have been affected as well.)

In the mid-1900’s, because of the genetic aspect of Ectrodactyly, entire families affected by this malformation would travel around America, performing in “freak shows”/carnivals. The most famous was Grady Franklin Stiles Jr., who performed under the stage name “Lobster Boy”. His life was depicted on the T.V. show American Horror Story: Freak Show as well as having books written about his story. In the winter of 2016, my husband and I found ourselves killing time before a flight in NYC’s Ripley’s Believe It Or Not Museum. Hanging on the wall was a black and white picture of a man with special hands and feet just like Finley’s. Beside the picture was a plaque on the wall that said “Crabby By Nature” circa 1900. It broke my heart to hear the teenage boy behind us exclaim, “that guy is so creepy!!”.

In comparison to her brother (Moebius Syndrome) and sister (Down syndrome), Finley’s Ectrodactyly requires very few specialists for her special hands and feet and she receives no therapies. I give so much credit to her foster mother in China who raised Finley in her home from the age of 12-24 months. She did not coddle Finley and expected her to do things to the best of her ability. The foster mother stated that she would just “let the baby try” to do anything a baby with 10 fingers could do. And this seems to have been the best approach!

Finley currently receives no help with her hands. However, if she ever wanted to do something that her lack of digits would keep her from doing, there are many adaptive prosthetics that we could investigate. Last year, Finley’s orthopedist asked me if there is anything Finley struggles to do. I told him there is absolutely NOTHING she can’t figure out. She wrinkled her brow and said, “that’s not true. I can’t wear gloves!” Haha!

It has become more complicated to find shoes that Finley can fit into as she gets older (and heavier). While her toes are pliable, they have recently begun to spread further apart. A little over two years ago we fit her for SMO’s (supramalleolar orthosis). These ankle braces strap her toes together and help her feet fit into tennis shoes that are also provided by her prosthetist. The SMO’s help support her arch and ankles and have been really useful. At some point, surgery may be an option for Finley. The orthopedist could bring her two toes together surgically to fit in a wider variety of shoes. This option would not be cosmetic, because her feet will never look like a typical foot, but could be something she chooses as she grows into adulthood.

No matter what the world tells you, always remember…

“A child being born with a difference is not tragic. It’s extremely important to show our children how capable and wonderfully made they are. If we treat them as flawed or limited, that is who they will believe themselves to be – and THAT would be the tragedy.” – Lucky Fin Project

From the medical side of things, Ectrodactyly is a very manageable special need. However, her differences are being noticed more and more by her peers as she ages. She is incredibly confident, but makes comments now and then that make us aware she struggles with her appearance. We want Finley to always see herself the way we see her. She is truly a gift to our family and we are so very thankful for her.

There are not very many articles written about Ectrodactyly (which is one reason I want to share the story of Finley’s special hands and feet). But I found the following links helpful..

Read more about our family’s story at Meet Tanna From Megavan Mama! If you are interested in learning more about our other children’s special needs, check out Moebius Syndrome – The Boy Who Can’t Smile and Parenting Piper – The Powerful Gift of Down Syndrome. 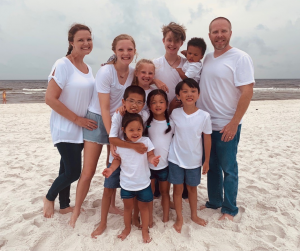 Hi, I’m Tanna! I am a homeschooling mom of 8 future world changers, advocate for kids from hard places, and manager of the best possible chaos. Join me as I navigate large family life, adoption, special needs parenting, and educating at home! Read more about our story here.